AWESOME SCIENCE IN THE BERG

We got to the Kamberg Rock Art Centre just after 9 am with learners from Zibukezulu Technical High School. We were joined by our partners Hectic Nine-9 and three science experts. Some of the kids were still groggy from the bumpy two-hour drive from Pietermaritzburg. The cold breath from the snowcapped Drakensberg Mountains injected some excitement into us. 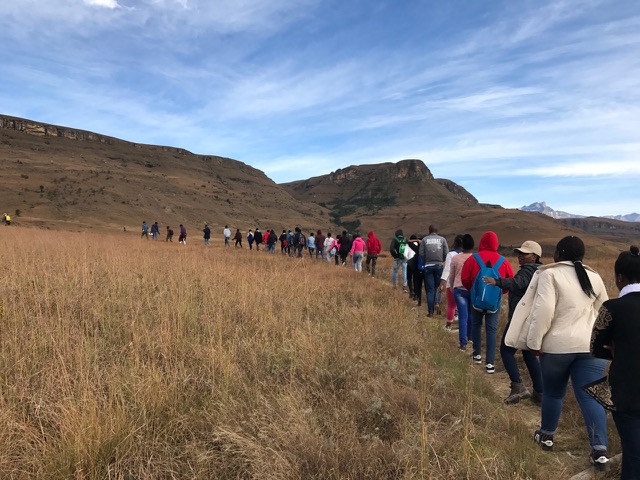 After taking many selfies with the stunning backdrop offered by the mountain, we headed off to watch a video showcasing the history of the San people who once lived in the Drakensberg. They used the mountains as shelter during their numerous battles with white colonialists. We were introduced to Richard Duma on video, a Zulu man, who claimed to be a descendant of San people! Not many can trace their heritage back to the San people who left traces of their lives through rock art. Dr Ndukuyakhe Ndlovu, who joined us on the trip, explained the significance of the San Rock Art paintings at Kamberg. These paintings contributed to the naming of the Drakensberg as a world heritage site! There was a lot of huffing and puffing as we hiked 4 km up the mountain to see the ancient artwork.

While we were scrambling up and down rocks, resting on huge boulders to take in the panoramic views, Dr Thakane Ntholi chatted to us about the geological history of the Drakensberg. We understood that it took millions and millions of years to lay down sediments which make up many rock layers of the Drakensberg mountains. The Drakensberg is capped with a thick basalt rock layer. Basalt is a type of igneous rock which forms from cooled magma which rests on top of the sedimentary rock below. Can you find out why the lava did not intrude into the sedimentary rock layers?

Along the hike we stopped at a few sites to see the fossilized remains of plants on cave walls. We must have walked where dinosaurs did millions of years ago because palaeontologists like Dr Nonny Vilakazi have found the fossilized footprints of dinosaurs in Lesotho. Surely, the dinosaurs were walking around in these mountains with their giant feet? What do you think?

Dr Nonny Vilakazi chatted to the learners about the various streams in the science of palaeontology. For example, she herself studies reptile fossils (or palaeo-herpetology). If you want to uncover more about human evolution, you can study to become a palaeo-anthropologist.

After the trip we ran a few workshops with the learners where they had the freedom to come up with rap songs about geology, palaeontology and San Rock Art. Catch what we did on the trip on Hectic Nine-9, with exciting interviews from both the learners and scientists!