…this is the rhythm of the Light

Learners, who had been preparing and practicing their songs on light, met up with leading SA scientists from the CSIR National Laser Centre and the International Square Kilometre Array project before putting their songs under the spotlight.

Hip Hop Science Spaza is celebrating the International Year of Light and Light Based Technologies – raising awareness of the importance of light in our lives – including its role in scientific discovery and numerous applications which affect our lives form data transmission to health diagnostics.

Also featured were the “Ionic Bonds”, Durban based science learners and runners-up in the 2014 Hip Hop Science Spaza competition along with beatboxer Lungelo. iFani was accompanied by up-and-coming Hip Hop artist, KZN’s Lex LaFoy who reflected on the role of the social sciences and the power of Hip Hop to change lives. 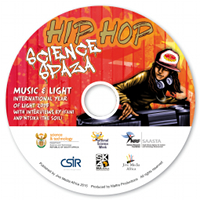 The Hip Hop Science Spaza Project is a national collaboration between popular music artists and learners in science clubs around South Africa to make science accessible to the general public. See www.sciencespaza.org. Science Spaza is an initiative of Jive Media Africa. National Science Week is an initiative of the Department of Science and Technology managed through the South African Agency for Science and Technology Advancement (SAASTA). Find out more at www.saasta.ac.za